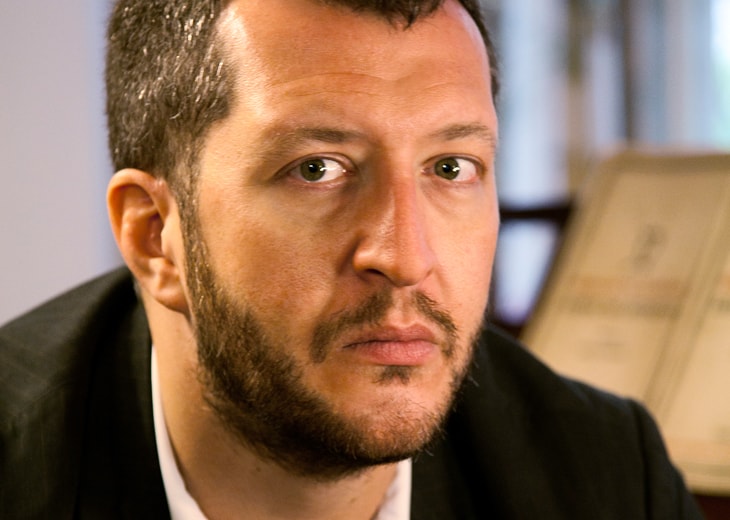 Philip Cashian (composer and Head of Composition at the Royal Academy of Music) has kindly created an audio guide for In Seven Days. He discusses the work and what to look out for when listening to the recording.

In Seven Days was originally conceived as a work for solo piano and orchestra with video projections and is based on the story of the creation as described in the Book of Genesis. The movements are:

Tom Adès was born in 1971 and early works such as Living Toys (1993), Powder Her Face (1995) and Asyla (1997) quickly gained him an international reputation as well as that of a pianist and conductor. Whilst still in his twenties he won the highly prestigious Grawemeyer Award.

Adès was 37 when he wrote In Seven Days for the pianist Nic Hodges: a joint commission between the London Sinfonietta and the Los Angeles Philharmonic. In an interview with Tom Service he says:

The story is set as a set of variations, reflecting the two-part structure of the story: Days 1, 2, and 3 are complemented by Days 4, 5 and 6. In Day 7 the theme is presented in its simplest form. Thomas Adès

Although the piece is heard in one single span the seven movements are clearly discernable and there’s a real clarity to the musical narrative that’s made all the more audible by his brilliant orchestration, making every corner perceptible. The music unfolds with such strong contours, slowly turning, transforming and accumulating, that there’s the real sense of a musical landscape being revealed and described in front of us.

First movement:
00:00 – 04:28: The 1st movement is the most substantial and begins with lively contrapuntal string writing, slowly spreading around the orchestra woodwind at 01:10 and low bassoons at 01:24, more legato, faster moving flutes at 02:01 and a sustained brass figure at 02:58. The gradual accumulation ends with the entry of the solo piano at 03:33 and (to my ears) a jazz infused riff with pizzicato strings and subtle small percussion at 03:39.

Second movement:
00:00 - 01:27: bell like chords and metal percussion with the piano slowing climbing down from the top of it’s register, set against low pedals and giving a tremendous feeling of space.

Third movement:
03:30 - 05:26:  the music slowly accumulates and leaves the piano in the foreground.

Fourth movement:
01:05 - 02:12: I particularly like the busy, rhythmic flute writing that quickly spreads, pushed along by the brass, into the rest of the woodwind section.

Sixth movmeent:
00:00 - 00:47: The 6th movement begins with fugal piano writing, very quickly spreading around the orchestra giving an immediate sense of movement and activity. Also listen out for the hand bells at 01:04 – 01:16 briefly accompanying the piano. From this point on (01:20- 02:29) the solo piano is richly polyphonic calming around 02:09 and leading into the contemplative final movement.