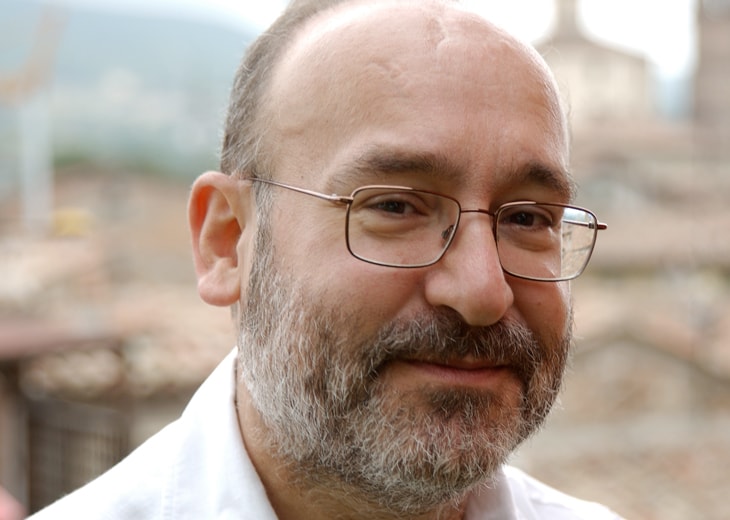 In October 2016, we performed music by enigmatic Italian composer Salvatore Sciarrino. His work has rarely been heard in the UK but is acclaimed overseas, so much so that he received Venice Biennial's Golden Lion Award for Lifetime Achievement just weeks before our London performance. We were delighted to perform in Venice in his honour.

Salvatore has put together a playlist of works that capture his sound world, and will help you to set the scene.
Philip Cashian (composer and Head of Composition at the Royal Academy of Music) dissected Sciarrino's ...da un Divertimento, to guide the listener through the work highlighting examples of what to listen out for.

Salvatore Sciarrino’s meticulously conceived music inhabits a world that is fleeting and transparent but at the same time charged with a disparate rhythmic energy and constantly shifting instrumental colours and textures, often taking instruments close to the limit of what is possible by employing extended techniques. This makes listening to his music live particularly engaging, as the virtuosity required of the musicians in creating such demanding and often unstable sounds adds an extra layer of drama to the performance.

Scored for wind quintet, string quartet and double bass, ... da un Divertimento is Sciarrino’s first piece for instrumental ensemble. Sciarrino was just 23 and living in Rome when he wrote it in 1970, but the music already shows many of the characteristics that make him such a distinctive and original musical voice from a stellar generation that includes Luciano Berio, Luigi Nono and Franco Donatoni.

A fundamental feature of his writing is that he removes the bass register from the music and explores the upper regions of instruments – the tantalizing area between pitched and unpitched sounds, as well as what is audible and inaudible.

...da un Divertimento is in two movements. Here are some things to listen out for in each.

The moment to moment musical surface of this piece is very intricate and detailed but the structure of the movement is very simple. A middle section is framed by two outer sections of repeating descending and ascending string glissandi.

A descending string glissando can be heard from 03’-10” into the movement. Then at 10”-12” there is a loud, percussive gesture as numerous instruments play together followed at 12”-15” by ascending glissandi. Variations of this idea are then repeated until 02’43” where there are several seconds of silence to clear the air before the middle section starts.

02”48”- 03’57” is the middle section of the movement and made up of very quiet frenetic activity from the whole ensemble; a web of sounds punctuated by tiny moments of silence as the music catches it’s breath.

Other things to listen out for include:

05’09” is a dramatic cut-off followed by a few seconds silence before a final phrase of music to close the movement at 05’14”.

This movement, to my ears, is made up of five sections, each framed by silence:

The music in this movement is a lot faster and more contrapuntal than the previous movement, and is episodic in nature.

Here are some particular moments to listen out for:

At 40” the sound of wind players blowing through their instruments is picked up in the strings and transformed. Each section seems to start (very briefly) with this kind of breathy sound coming out of the moments of silence beforehand.

In the 01’52”-03’18” section the woodwind instruments are very much in the foreground and play a lot of multiphonics.

Pizzicato at 05’13” and 05’16” in the lower strings signals the beginning of a brief and very delicate, quiet section from 05’19” to the end, which closes the piece.