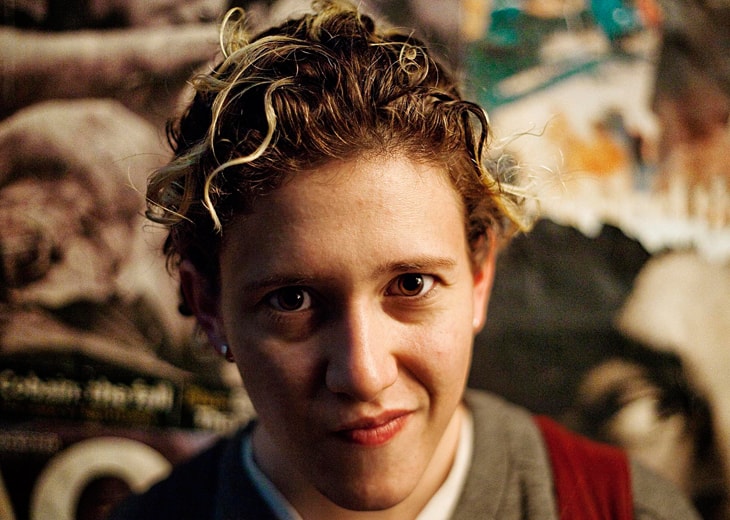 Although I didn't refer to these things at the time of writing the music, I realise on reflection the influences in the music were likely from these sources. Mica Levi

For the seduction methods of the protagonist

Old strip club music, music styles associated with sex. For a while in the 2000’s producers such as Dre sampled Bollywood music from films, sampling happens from movies loads anyway in Hip Hop, like Wu-Tang Clan’s Kung Fu movie samples."

DJ Screw was the pioneer of screwed music – and in my opinion the most hardcore avant-garde early hip hop artist – distorting time, cosmic too.

The alien elements of the score were influenced by Iannis Xenakis’ Tetras – I’d never heard anything like this before when I first heard it.

"The song ‘love’ from the score is the protagonist's first experience of having feelings for a human. It was influenced by rushes of emotion and euphoric club music."

The ‘cosmos’ music was all about innovative use of percussion, lots of cymbal rolls – think Art Ensemble of Chicago’s style.”

Mica faces our quickfire Q+A and tells us about her musical style, her fears and her best musical joke...

What do you regard as your greatest artistic achievement?
I broke in and climbed up a city building under construction with my friends as a teen, to the scaffolding’s 11th floor – that was freedom. I could tell you my worst more easily.

What do you fear?
Boredom, constant sadness, arthritis (fear itself).

What’s the most unusual performance you’ve been a part of?
My band and I played a song of ours with about 40 school kids in a church once – that was insane, it was way better than the original.

What was the first recording you ever bought?
Probably the Beatles second hand <3. But new music was Comin’ Atcha! by Cleopatra (an all girl group from Birmingham, 1998).

If you could have any other profession, what would it be?
A pro-footballer, pro-racing driver or pro-jungle trawler. Sorry that’s three!

Who has been the biggest influence in your life?
My Dad probably.

Tell us your best musical joke.
What’s the difference between the first desk of the violas and the second? A semi tone.

We love this interview with Mica Levi, conducted when London Sinfonietta worked with her band Micachu & The Shapes on their album Chopped and Screwed. She talks about her approach to music-making, the significance of making her own instruments and her collaboration with the London Sinfonietta.

Our Instagram account is your backstage pass on the day of the London performance, but in the meantime, here are some snaps from rehearsals for Under the Skin with Mica, conductor Jonathan Berman and the orchestra. Follow us on Instagram to see more.

Rehearsing for our #UnderTheSkin tour which kicks off this weekend in Nottingham. We bring it to London on 4 April.

At last week's rehearsal of #UnderTheSkin with #MicaLevi ahead of our tour of the film with live score which started in Nottingham last weekend. We bring it to London on 4 April @southbankcentre ?? #HowToGetBackstage