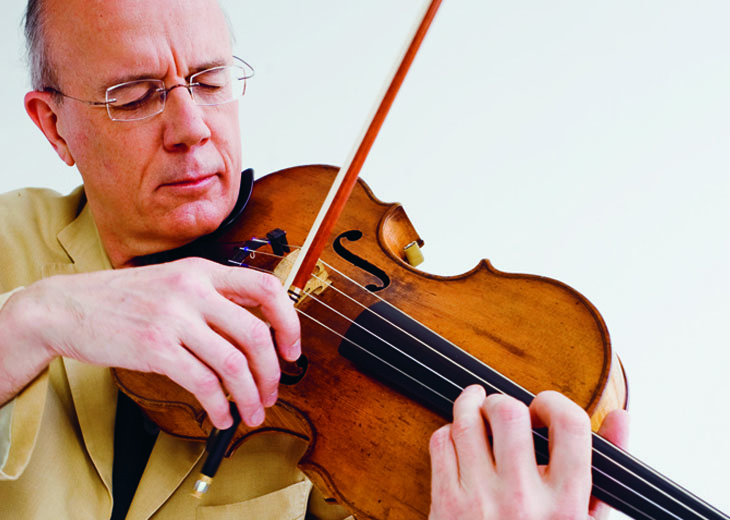 Paul Silverthorne has combined a busy solo career with the position of Principal viola of both the London Symphony Orchestra since 1991 and the London Sinfonietta since 1988. On leaving the LSO in October 2015 he was appointed Professor of Viola at the School of Music at Soochow Uni-versity in Suzhou, China where he has joined the international faculty there. From his base in China he continues to perform and teach in the UK and elsewhere and maintain his relationship with the London Sinfonietta.

His solo performances regularly take him to the USA, Far East, Australia and Russia as well as clos-er to home in the UK and Europe.  He has performed with such conductors as Sir Colin Davis, An-dré Previn, Sir Simon Rattle, Sir John Eliot Gardiner, Christopher Hogwood, Oliver Knussen, John Adams and Kent Nagano, with the LSO and other major orchestras in the UK, USA and Europe.  After a performance at the Proms, The Times described him as “a virtuoso in sensitivity and technique.”

He is particularly renowned for his interpretation of new music and his commitment to this field has led to close relationships with leading composers of our time, many of whom have been inspired to write for him. He has worked closely with Pierre Boulez, Luciano Berio, Hans Werner Henze, Eliot Carter, Steve Reich, John Adams, Oliver Knussen, George Benjamin and Helmut Lachenmann among many others and is closely involved with several young composers schemes in the UK and China.

His recordings cover a wide range of repertoire and appear on EMI, Naxos, Chandos, Koch International Classics, ASV, Meridian, Albany and other labels to widespread acclaim. His recent CD, 'Beethoven by Arrangement' with pianist David Owen Norris, a collection of works arranged for viola and piano was issued on the Toccata Classics label and widely praised. “With a performance of the quality here, we can experience the dedicated and delightful musicianship that these players bring to this wonderful music.” International Record Review

Supported by Nick and Claire Prettejohn