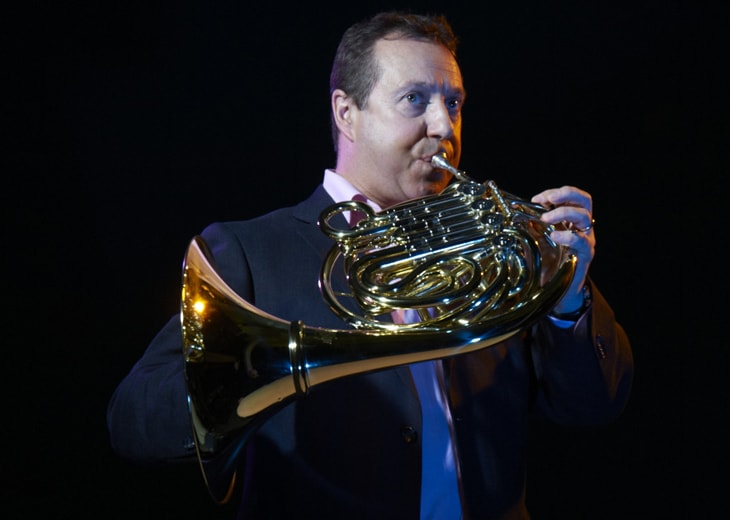 Internationally acknowledged as one of the world’s leading horn players, Michael Thompson is also regarded as a charismatic and inspirational teacher. As a conductor, he is known as a fine orchestral trainer and has received acclaim for his work with young musicians.

After studies at the Royal Academy of Music, he was appointed principal horn with the BBC Scottish Symphony Orchestra at the age of 18. Within three years he was offered the principal horn positions of both the Philharmonia and Royal Philharmonic Orchestras. He joined the Philharmonia and remained in that post for ten years before leaving to concentrate on his solo and chamber music career. His work as director / soloist and conductor has seen him perform in Japan, Australia, the USA. Europe and Scandinavia, including his debut with the Danish Radio Sinfonietta in Copenhagen, the Ostgota Winds Symphony in Sweden and the Alabama Symphony Orchestra. In the UK he has directed the London Sinfonietta, Bournemouth Sinfonietta, Britten Pears Orchestra, Ulster Youth Orchestra and the Royal Academy’s Sinfonia and Concert orchestras. He has conducted a number of community orchestras and was Principal Conductor of the City of Rochester Symphony Orchestra from 2003 until 2008.

His concert schedule takes him worldwide and his discography includes the major solo horn repertoire, period instrument recordings and a number of critically acclaimed CD’s with his wind quintet and horn quartet. As a member of the London Sinfonietta he is at the forefront of new music and has given many first performances, including the UK premieres of Ligeti’s “Hamburg Concerto” and Richard Ayres’ “Noncerto”.

In addition to his classical work, he is very active as a studio musician, playing on sound tracks too numerous to list but including The Lord of the Rings, Harry Potter and the Bond films.

His work for Sir Paul McCartney resulted in the composition of “Stately Horn” which the Michael Thompson horn quartet premiered in the Royal Albert Hall and Carnegie Hall.

Michael Thompson is a Fellow and Aubrey Brain professor of horn at the Royal Academy of Music and gives regular master-classes and lectures throughout the world. He plays on an instrument made by Paxman of London.