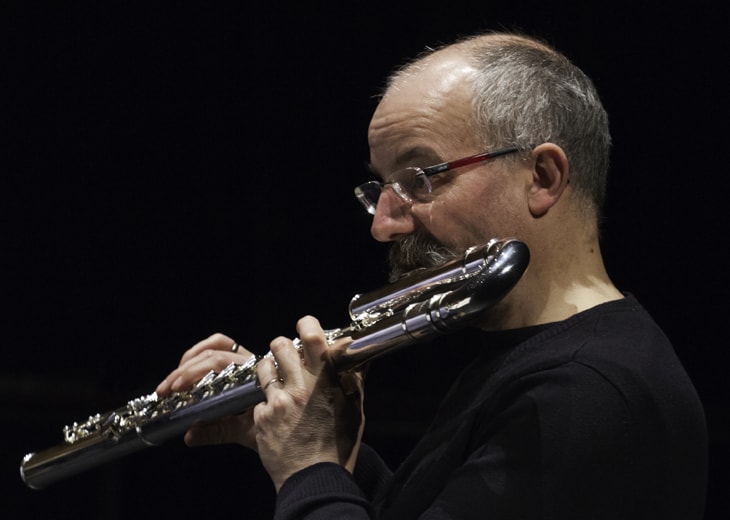 Michael Cox is one of Britain’s foremost flute-players. Although born in England he spent his childhood in Africa. He studied music at the Zimbabwe College of Music and then the Royal College of Music in London. Early competitive successes led directly to a solo career that has included concerts and recordings in all continents and performances with major orchestras and conductors.

As a chamber musician he has performed with many well known British quartets, quintets and ensembles (and worked alongside musicians of the ilk of James Galway and Murray Perahia) as well as being a member, at various times, of the Haffner and Albion wind ensembles, London Symphony Chamber Players and London Sinfonietta.

An interest in a wider repertoire led to a concurrent orchestral career, first as co-principal with the BBC Symphony Orchestra, and then as principal flute of the London Symphony Orchestra, London Mozart Players and Britten Sinfonia. He now holds what he considers an ideal portfolio of tenures combining the principal flute chairs of a symphony orchestra, chamber orchestra and a contemporary music ensemble - namely the BBC Symphony Orchestra, the Academy of St Martin’s in the Fields and the London Sinfonietta. Through this work he has worked with a great raft of the world’s greatest conductors and soloists. Also, his particular interest in contemporary music has meant that he has also worked, often closely, with composers such as Messiaen, Takemitsu, Dutilleux, Berio, Boulez, Tippett, Birtwistle, Stockhausen, Henze, Adams, Carter, Penderecki, Lutoslawski.

A passionate and highly dedicated teacher Michael Cox is professor of flute at the Royal Academy of Music in London and is sought after as a visiting consultant and by students worldwide. In addition he has also given his unique curricular flute course internationally, most recently at the Oxford Flute Course, UK, and in Adelaide, Australia. Michael Cox plays on Altus flutes and has recently become an Altus Artist.

Supported by Michael and Patricia McLaren-Turner