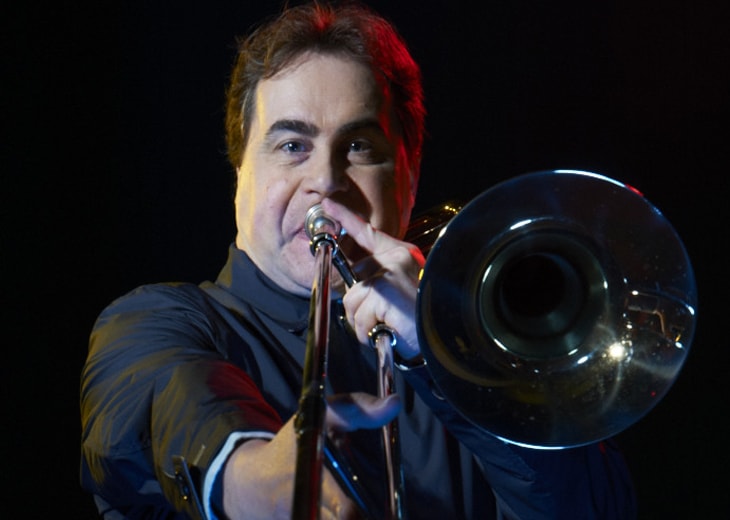 Byron Fulcher was born in Cornwall and took up the trombone at the age of 9. Just three years later he won the National Junior Solo Championships and performed a solo at the Royal Albert Hall. He entered the Guildhall School of Music in 1988 where he studied with Eric Crees and shortly after graduating took up an appointment in the Symphony Orchestra of Galicia in Spain. He subsequently became Principal Trombone of the BBC Scottish Symphony Orchestra before taking up the same position with the Philharmonia in 2001.

Byron made his BBC Proms solo debut in 2012 performing Berio’s virtuosic masterpiece 'Sequenza V' at the Royal Albert Hall. Other solo performances have included a Purcell Room debut in 1994 and the British premieres of Gyorgy Ranki's 'Tales of Father Goose' and Marco Stroppa's 'From Needles Eye', the world premiere of Dai Fujikura 'K's Ocean' as well as concertos by Jacob, David, Grondahl and Bourgeois.

Byron first recorded Mahler’s Symphony No 3 with the European Community Youth Orchestra and Vladimir Ashkenazy and has since recorded it twice with the Philharmonia under Ben Zander and Lorin Maazel. He has also performed with all the London orchestras and played under the baton of many of the world’s finest conductors including Abbado, Bernstein, Blomstedt, Boulez, Sir Colin Davis, Dudamel, Gergiev, Haitink, Harnoncourt, Maazel, Mehta, Muti, Rattle, Salonen, Svetlanov and many others. He can also be heard on the soundtrack of over one hundred films including 'Gladiator', 'Lord of the Rings', ‘Pirates of the Caribbean - At World's End', ‘Wallace and Grommit - Curse of the Were-Rabbit' and the Harry Potter series.

Byron was invited to perform at the International Trombone Festival in Helsinki 2002 and Birmingham 2006 and has judged the ITA competitions on several occasions. He has given masterclasses in Asia (Japan, Singapore and China), Europe (UK, Portugal, Spain and Switzerland) and South America (Peru) and teaches at the Royal College of Music in London. He directed the RCM Trombone Ensemble to runner up in the 2015 ITA Remington competition.

Byron has been Principal Trombone of the London Sinfonietta since 2008 and as a member has been involved in many British and world premieres including Birtwistle’s ‘Echo' for horn & trombone with Michael Thompson and John Adams’ ‘Son of Chamber Symphony’. Byron is also a member of London Brass, performing both trombone and euphonium on the album 'Surprise'.

Byron is a Conn-Selmer Artist who endorses Vincent Bach Trombones.