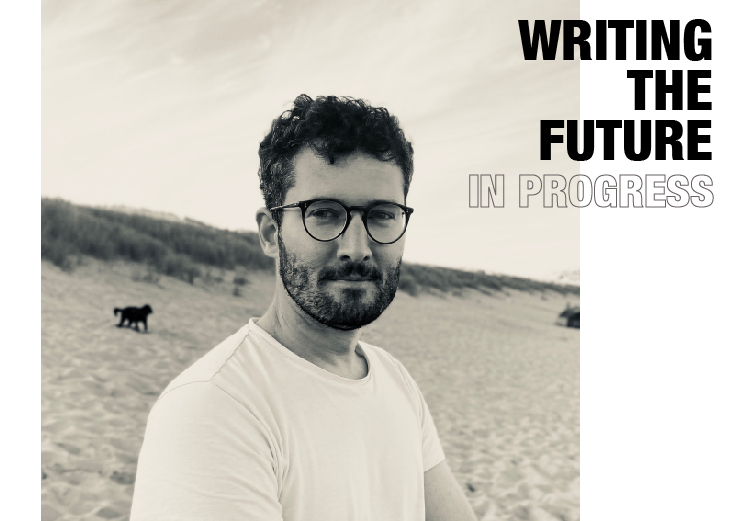 Writing the Future is a scheme that provides a bursary to four composers at the beginning of their careers, allowing them to work with the ensemble over a two-year period to create a new piece of music that expands the chamber music format, using techniques such as infrasonic sound, immersive staging, speech transcription, and tapestry as compositional inspiration. In this blog we hear from one of four Writing The Future Composers Luke Lewis on his experiences of the programme, and composing his new works.

A few of weeks ago, the wonderful Jonathan Morton and Clio Gould gave the online premiere of a few short pieces, ‘Shrove Duos’, for two violins. I’d started writing the pieces with social-distancing in mind but it turned out that with the first performers being a married couple, it was perhaps the least distanced performance imaginable. You can see it all here.

Needless to say, they played it beautifully. And as with all great players, they contributed as much as I did to the piece as a whole. But there were more contributors than just us three. The conventional idea of the ‘composer’ in this instance feels an awkward fit with the piece being based heavily on a recording of a ‘Williams the Postman :(b.1899) singing the ‘Pancake Song’ (I found in the National Museum of Wales archive and you can hear it here but we did play it back in the livestream). I took this recording and transcribed it in super detail using computer software to help pick up the fluctuations in pitch and precise rhythm, but also using my own ear a lot so as to not lose ‘the music’ of the performance. These aspects then combined to provide the basic material of the piece. After a opening movement that explores the pitch inflections in Williams’s first phrase, the middle of the three movements plays out the drama in the song lyrics: begging man pleads for pancake ingredients, woman of the house responds, man pleads again, woman responds, and so on. This is only start, though, as I go further to have them interact – protest, argue, discuss, make of it what you will – using fragments of the melody to develop the story further. The final movement has the voices try to find some unity but if they ever do it is an uneasy one.

The recordings are of the sometimes sad, sometimes jovial songs and tales of old miners and I’m taking these as a starting point for a piece that explores ideas of voice, translation, politics and belonging.

Overall, the process of composing looks forward to my larger piece for the ensemble. It’s already well on the way and at the beginning of April I had the chance to run some drafts with the ensemble – more on that soon. The beginnings of the piece come from how the famous American ethnomusicologist and song collector Alan Lomax went to the valleys of South Wales in the 1950s. He’s mostly known for recording American folk music but that he recorded in Wales was an inspiring discovery for me. The recordings are of the sometimes sad, sometimes jovial songs and tales of old miners and I’m taking these as a starting point for a piece that explores ideas of voice, translation, politics and belonging. The first stage is transcribing singing and speech from the tape recordings using both my ears and computer software to draw out the material’s inflections and unique characteristics. This provides the basic material the Sinfonietta players play but also threaded through the score are elements of the original recordings that sometimes have themselves undergone electronic transformations.

The piece is to be a conversation between distant lost voices of a very particular time and culture. But at the same time, through the compositional choices I make I also want it to be a conversation between the past and our collective present and for this material to shine new light on present-day questions. Lomax’s miners speak of national identity, striking for better pay and conditions, unemployment, gender roles, language and culture; all themes as relevant today as they were fifty or one hundred years ago. The idea is there, in a modest way, in the Shrove Duos and in the live-stream an audience member asked whether the use of a traditional song that concerned food poverty was an intentional reference to present-day questions of food poverty in the time of coronavirus. Of course, it was. The intention was that whilst the piece was hopefully an exciting and rewarding musical experience, its themes resonated in a listener beyond the performance. Might it be possible for a piece of new music (without sacrificing any ‘musical’ qualities) to create a fresh space for us to think about problems in society and how we might go about our lives differently to fix them?