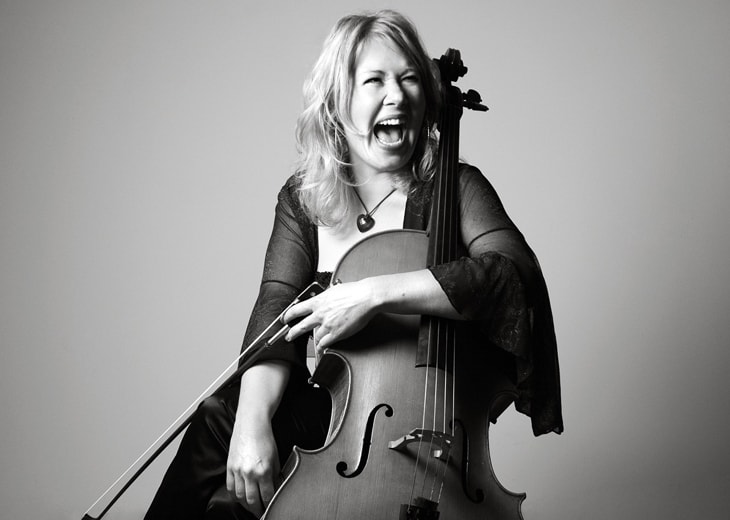 Cellist Zoë Martlew faced our quickfire Q+A ahead of our performance of In Seven Days at the Royal Festival Hall in 2017, at which she presented a break-down of the music, together with actor Sam West.

1. We’re really looking forward to In Seven Days on 1 February – can you tell us what draws you to this particular work?

The technical virtuosity of this fearless tackling of the Genesis myth combined with it's haunting harmonic beauty makes In Seven Days a definite keeper for me, imparting a delicate magic that has grown with repeated hearings.

2. What should audiences listen out for/do you have a favourite moment in the piece?

3. Can you talk about the challenges of the work? (We’ve heard this is particularly difficult to play for even the finest musicians!)

As in so much of Adés' music, contrasting rhythmic patterns and tempi are superimposed, so that the musicians have to number crunch while also negotiating extreme registers of their instruments and sudden leaps in pitch. During a rehearsal of the ferociously tricky opening section, Adés (who was conducting) told the violins to imagine that they were carrying a large tray of water which had to be balanced evenly while walking, without spilling a drop. A perfect description of what it can feel like to play his music.

4. Thomas has discussed the piano part as the “consciousness” of the work. As a listener, what are your thoughts on the importance of the piano part in the telling of the story?

Unlike a traditional piano concerto where the soloist gets to show off in a cadenza, in this piece the piano part, for me, is both a mathematical weaving of musical DNA and an intrinsic force both in the creation of the piece's world and commenting on it. By the time we get to the seventh day – Contemplation – one can indeed relate to the idea that the piano part represents pure consciousness, an enlightened sense apart from the physical structures that appear to bring it into existence. Or in other words, soul, to risk a loaded term.

5. How do you think the worlds of science and religion have merged in this intricate work?

The book of Genesis may well have summed up the cutting edge scientific creation theories of the time, which happen to follow pretty much what is currently believed about the order of post Big Bang events. Reflecting the notion of life emerging from primordial soup, the piece is crafted meticulously from tiny musical cells which develop with fractal precision throughout the piece. The music follows the story, event by event, and the devotional quality lent by the piano’s "consciousness" and the glowing harmonic language, makes this as close to a sacred work as Adés has written to date.

Now we’d like to get to know you a little better!

6. What do you regard as your greatest artistic achievement so far?

Staying alive. That, and my “vegetable wok udon surprise”, a total one-off.

7. Describe yourself in three words.

8. What’s currently on your coffee table at home?

9. We regularly work side-by-side with students from the Royal Academy of Music Manson Ensemble – what advice would you give to musicians starting their careers now?

Since forever, music conservatoires have tended to give the impression that there are but four mutually exclusive categories of work open to emerging young musicians: sparkly soloist, chamber musician, orchestral job or (god forbid) teach. While all these still apply – teaching being a vital component of self discovery as a musician in my experience – there is now SO much more out there for those of brave heart and open mind. One can combine a classical training with improvisation, film, electronics, theatre, composition, dance, pop, rock, folk, jazz, video art and so on. So be prepared to take risks, explore and most importantly, keep the passion for what you do burning in whatever way you can!

Arnold Schoenberg walks into a bar. “I’ll have a gin please”, he says, “but no tonic”.