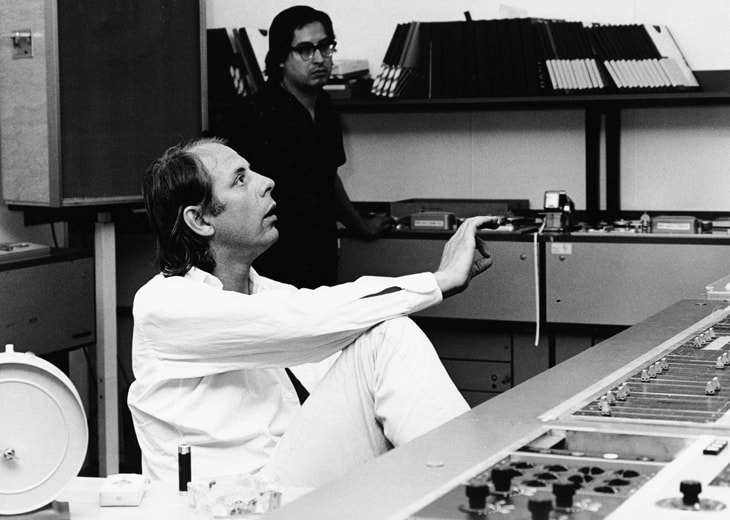 As one of the most iconic and influential pioneers of new music, Karlheinz Stockhausen radically transformed the contemporary musical landscape in the 20th century. From serialism to new electronic music, his works pervade the limits of musical invention, and dramatically changed perceptions of music. As the London Sinfonietta navigated through the late 20th Century, we worked with Stockhausen to bring new, experimental, and sometimes contentious pieces to new audiences. We look back at our relationship with the composer over the years, from early performances and commissions to some stand-out memories from our players...

In May of 1968, just five months after the ensemble's debut concert, we began our Stockhausen journey with a programme including Stockhausen's Kreuzspiel (1951), Zeitmasse (1955–1956) and the UK premiere of Plus-Minus – juxtaposed alongside the familiar sounds of Mozart's Serenade No. 10 in B flat at Wigmore Hall!

A year later we performed the UK premiere of his Adieu (1966) for wind quintet in a very new Queen Elizabeth Hall, having opened its doors just two years previously.

With eight performances of Stockhausen repertoire in 1971, the ensemble took the work of the German composer on their first international tour across Europe.

In 1972 Michael Vyner became the artistic director of the London Sinfonietta. During his tenure, the orchestra became defined, more specifically, as an ensemble that was willing to perform uncompromising modernist music. By continuing to perform the composers who had emerged during the 1950s, the London Sinfonietta demonstrated their significance on the musical landscape and presented changes that were occuring in 1970s composition.

With the direction of Vyner, came Stockhausen's first and only performance with the ensemble as composer and conductor. The programme combined previously performed Kreuzspiel (1951), Zeitmasse (1955–1956) along with the UK premieres of Stop (1965) and Kontra-Punkte (1953), and the world premiere of Ylem – a London Sinfonietta commission for a variable ensemble of 19 players. 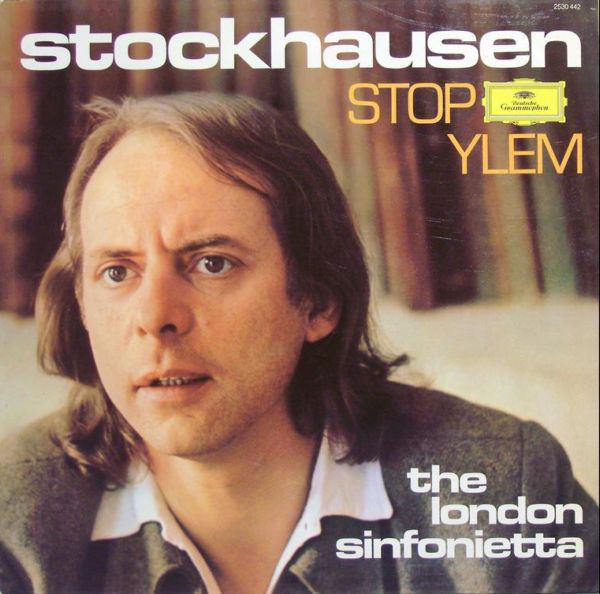 Never a composer to aim low, Karlheinz Stockhausen in his commission for the ensemble, Ylem, requested that the musicians mirror the origin of the universe, fanning out along the side aisles of Southbank Centre's Queen Elizabeth Hall, metaphorically blown by the cosmic wind 'Ylem'. This was, happily, one of the first of the ensemble’s moments captured on television, and the entire concert programme was also recorded for LP release by Deutsche Grammophon (pictured). Apart from the subsequent European tour a few days after the London event, Stockhausen never again conducted the London Sinfonietta. Read on to hear from John Constable, who held the position of London Sinfonietta Principal Piano for 50 years.

Afterwards we all agreed that he was one of the most inspiring people we had worked with. John Constable, London Sinfonietta Principal pianist 1968-2017

John Constable (London Sinfonietta Principle Piano 1968-2017), pictured above, performed with Stockhausen in 1973 – spot his name in Stockhausen's hand drawn stage plan above. He looks back at his experience with the composer...

"In the early years of the London Sinfonietta one of the most important things that David Atherton and Nicholas Snowman did was to organise concerts with the great composer-conductors of the time, Boulez, Berio, Henze and in 1973, Stockhausen. We rehearsed solidly for two weeks and then performed concerts in London and all over Europe finishing with recording the complete programme.

We were all a little in awe of him as we had been sent a letter saying "all technical problems will have been solved by the first rehearsal". He also stipulated the minimum size of the rehearsal room and that all rehearsals had to be two hours rather than the standard three hours. The tension was high in the early rehearsals partly I think because he had had difficult experiences with other ensembles. At a particularly tense moment he described one piece as being a series of pitches, noises and pitches, and David Purser, our trombonist said " you mean it is a sort of Pitches at an Exhibition". I don't think he thought it was funny but we all laughed and the tension was broken. We soon established a very good rapport with him. He quickly realised our determination to do everything he wanted and to play his music to the highest possible standard." – John Constable 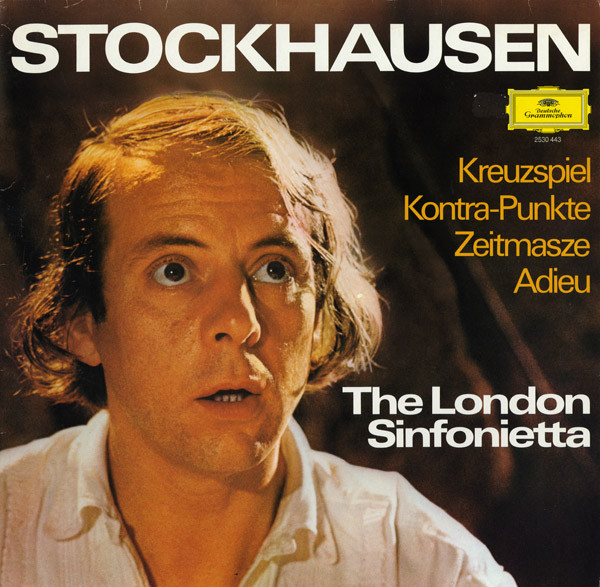 In 1974 this record was released, featuring a selection of different works performed with the London Sinfonietta using experimental microphone and speaker placements, including Kreuzspiel for oboe, bass clarinet, piano and 3 percussionists (1951), Kontra-Punkte for 10 instruments (1952-3), Zeitmasze for 5 wind instruments (1955-56) and Adieu for woodwind quintet (1966).

Over the course of the 80s and 90s the ensemble performed Stockhausen on 10 different occasions, including a performance in Portugal, and two birthday celebrations. This period also saw the UK premiere of Der Jahreslauf in London as part of the composer's 70th birthday celebrations, conducted by Oliver Knussen.

Stockhausen's music continues to be a mainstay in the London Sinfonietta's programming, as one of the most influential composers from the 20th Century. Since the turn of the century, the ensemble have performed The UK premieres of Five Star Signs, a new version of Zodiac: Funf Sternzeichen, Funf Weitere Sternzeichen, and the world premiere of a new arrangement of Portrait for Tara as well as the world premiere of Klang for tape 'Urantia', to name just a few. We have also performed various pieces 'side by side' with students from the Royal Academy of Music, including Gruppen (2013), Hymnen (2015) and Trans (2017). These concerts allowed these rarely performed Stockhausen works to continue being explored and performed well into the 21st Century, and for the London Sinfonietta to pass our tradition onto the next generation of musicians.

In May 2019, we bring his monumental opera Donnerstag aus Licht to the UK for the first time since 1985, as we continue to explore and celebrate the maverick composer, and bring his music to the forefront of the contemporary classical scene.